Ed Greenwood on the 40th Anniversary of D & D

One piece at a time - Retooling the most recent campaign


This song/video pretty much captures the hopes for taking the current Dragonquest Campaign and turning it into a Dungeon World Campaign. While I am not fan of games that force someone into taking a class, I am not completely opposed to it. I am looking forward to seeing how the first couple of sessions play.  We are hoping for less then 60 pounds of paper.
Posted by Padre at 1:59 PM No comments:

Knowing that I cannot leave behind the 30+ years of gaming that has been part of my history. Home Brewing a Dungeon World Campaign seems to be in my future. I think the main point of departure will be staring hit points and potential racial moves that a play may earn for their character. I am looking forward to playing a session where combat does suddenly slow down the pace of the game.  I think Dungeon World has the power to do that.
Posted by Padre at 9:20 PM No comments:

If, when and less 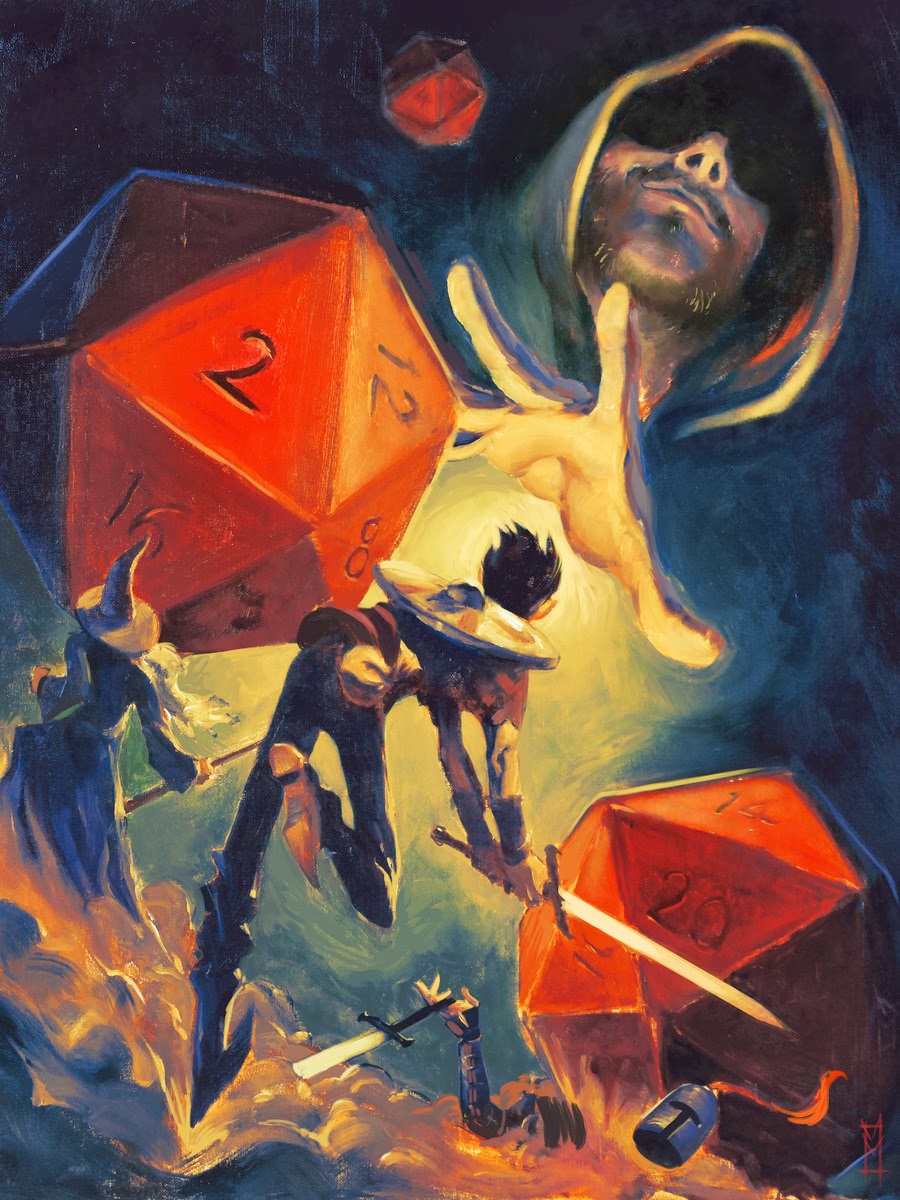 More delving into Dungeon World. It looks like I will be rolling a lot less dice as a GM in Dungeon World.  Most of my work will be setting up the event/move/encounter/incident and then see how the characters react. Their choices and subsequent dice rolls will move along the event.  Not really all that different then what I have done in DMing any other RPG, just a lot less rolls involved.  I tend to let the dice determine a lot in Dragonquest, I will have to reform some of my gaming habits but I don't think it will be that difficult.
(The fighter getting crushed by the d20 is pretty awesome.)  Now it is just a question of if and when I actually get to play the game.  Will it be like so many other RPG's that I have purchased, read, and shelved?  We hope not, but if and when must happen before less rolling will occur.
Posted by Padre at 7:33 AM 2 comments:

It's all about the questions, (really the story) but as it is defined by questions. 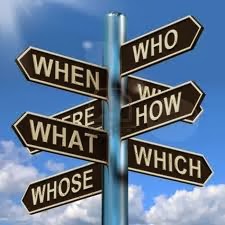 More diving into Dungeon World. It is so different from what I am used to as a GM of 32 years. DW has some elements of play that I am familiar with.  One of the things that I noticed right away was static hit points.  That is a feature that Dragonquest possessed and set it apart from D & D. You did not gain hit point as you raised levels. You gain abilities and other improvements, but no additional points. The other things I noticed was experience points. DW has removed all the 000's. Often time events in the game give you 1 experience point. 1?  From someone who is used to dealing with the  lots of 000's that seems really odd.  I guess in the end it doesn't matter if there are hundreds or thousands of EXP, just what those EXP allow you to do when you improve.
The main thrust of the game seems to be the narrative or fiction. The game tries to run combat as fluidly as the rest of the game occurs. There is much more role-playing then roll-playing. I don't have anything against "roll-playing", there is a lot of fun and even comfort in the rolling of dice as part of the game. DW does not eliminate that dimension, but it certainly takes it away from the forefront of action.  The real action is in the questions that are presented and how the characters chose to respond to them. I think the ideal is that every question deals with real consequences, great or small. Actions should generate more questions, more narrative and then another roll. Tactical placement and turns seems rather moot as along as all the players and GM are fine with the flow of the combat narrative. Of course I think that is the case in every RPG, however DW wants the story to precede the dice rolling and have the rolling of the dice as part of the response.  The game embraces partial success as the means for greater story embellishment.
There is no critical hit chart, I am guessing that they prefer the GM to make up the injuries as needed, but I prefer the randomness of the charts. I may have to add a grievous injury chart of some sort in homage of one of my favorite things in Dragonquest. Of course Dungeon Crawl Classic has some great charts based on the players level. I may have to adapt something from there. Perhaps I will work on developing a Fatality chart, something to embellish the death of an opponent. Oftentimes it seems that one just beats down a foe and if no critical or grievous is scored that is the end of the combat. I am not necessarily looking for something gory to add as much as something that makes the end of a foe more dramatic but less scripted.  The chart is not something for fighting the goblin masses but rather named adversaries of the adventurers.  I do enjoy the randomness of charts! 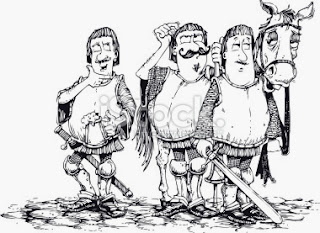 Been reading through the rules to Dungeon World on the iPad and I have to say I am suffering from a sense of system shock as well as some degree of excitement.


All of this is very different from my 32 years of playing Dragonquest and other games that resemble small tactical battles when the combat unfolded. That combat could become more fluid is appealing, I have tired to telling new players that they are so limited in their moves. Dungeon World seems to promote: "Go for it buddy, but beware the consequences!"
I am a fan of the "sheet" setting the boundaries for one's character, but Dungeon World seems to refer to the "sheet o'stats" only for crucial rolls, ones that move along the events of the story.   Dragonquest is my first and strongest gaming love, but certainly not my only game. It's been a while since I tried a new fantasy game, Dungeon World looks more promising than when I first bought the game a year and a half ago.
Posted by Padre at 3:35 PM 5 comments: 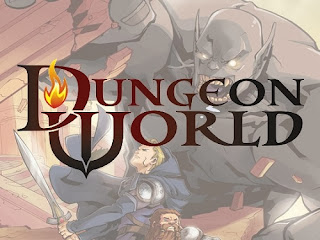 As I look at various games to play in 2014, right now I think I like the feel of Dungeon World. I probably have too much residual bias against various renditions of D & D to really want to play one when I could just as well play Dragonquest in an untampered form. Right now I am reading through the rules to get a feel for the game. It looks promising.
Posted by Padre at 12:40 PM No comments:

How did I get in the middle of this? 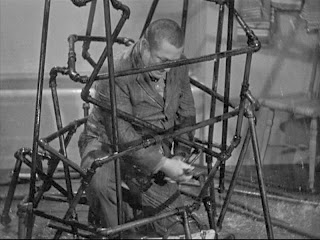 My work on the Blood Moon campaign and setting has often felt like this. Somehow I got trapped in this mess of pipes as I tried to add and clarify more things in the game and setting. That does not mean that I have any intention of giving it up, just that it is taking more time and effort to work out the details then life affords.  The real enemy to my playing has been lack of time, while I tend to be a bare-bones type of planner and like to go with the flow created through the interactions with the players, planning for this "Frankensteined" setting has taken a little more time.
Here's to hoping that 2014 affords more time and greater exploration of a hobby I truly enjoy. I think one of my goals for this year will be play/run a non-Dragonquest setting game. Right now Dungeon World is looking appealing to play with a group. I may also take another look at The Mutant Epoch. I think a post-apocalyptic setting could be a lot of fun to play again.  It's been a while since I played Gamma World back in the 1980's.
Posted by Padre at 5:57 PM 1 comment: 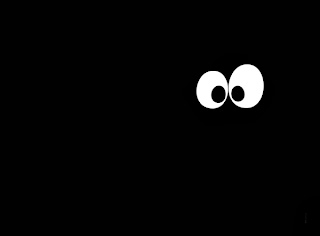 I hope during this New Year to emerge from my cave and actually make more use of this blog to share thoughts, experiences and stories on the things I enjoy in life: gaming, music, books and movies. Occasionally I will mention what I love, my God, my family and my friends.  Blessed New Year to all those in the OSR community, RPG community and any others who have reason to frequent this blog.
Posted by Padre at 9:20 AM 6 comments: