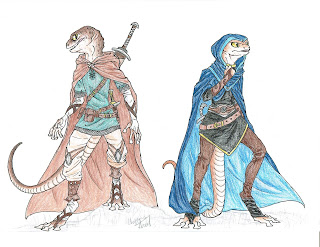 Tonight's artwork is courtesy of Pandora. She is a very gifted young player and artist. She was kind enough to draw and color one of the races in Dragonquest that was carried over to the Blood Moon setting. Pickers are a gecko like race of lizard men that live nomadic lives as merchants, scouts and explorers. While not all that powerful they are a gifted race with many abilities that have ensured their survival in a fallen world.
Posted by Padre at 8:27 PM No comments: 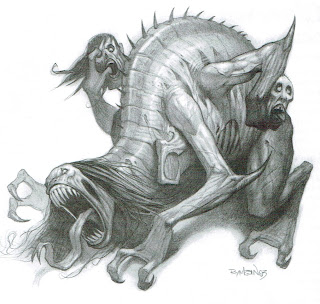 Hounds of Vengeance accompany Soul Snifters as both bodyguards and as a source of fresh souls. They are capable to turning corporeal undead and the living into spirits that are then collected by the Snifters. While only possessing animal intelligence, they are very responsive to their keepers. Stunned or unconscious opponents are particularly vulnerable to their decapitation attacks. 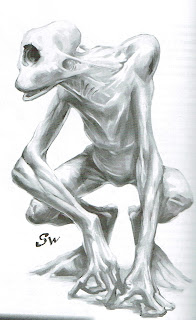 Soul Snifters prefer to avoid interacting with the living or corporal undead. Their singular mission is to collect souls and spirits for their masters. They are greatly fear by the undead. Often commanding a team of hounds, they scour the lands looking for ghosts and incorporeal undead to harvest. Because of their abilities, even great undead such as spectres and wraiths prefer to avoid them.

*Both of these monsters have been taken from the Book of Fiends and recommissioned for Dragonquest. The artwork in the book varies. Some pieces are well done, and others look pretty lame. These two work into the cosmology of Blood Moon as a world that is overrun by demons, undead and other planar creatures.
Posted by Padre at 10:34 PM No comments:

Fleshing out the undead 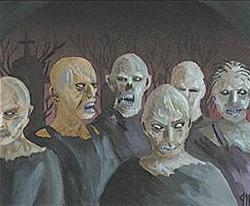 As I prep for game play with the new characters I am slowly fleshing out the various undead that inhabit the world. Thankfully WOC have ample undead to incorporate into the campaign. My own home grown group of undead called the Graven come in a number of different flavors.
Graven are available as a playable race in Blood Moon and for the most part resemble the race they were prior to their crossing into the world of undeath. Those that cross over but do not remember their past or long to continue it often roam out into the wilderness where they gather in enormous hordes for protection. These grey walkers are often harmless, but in a panic they can stampede and crush things underfoot. Some become undead wailers and summon other undead in their wake. Thankfully grey walkers do not often roam into towns.
Blood Moon Ghouls or Red Runners are voracious versions of graven that devour any of thing alive. They posses amazing speed and strength and can empty out an entire town in a matter of minutes. They are able to infect others with their disease. Any of the living that die from this disease return to life as a Blood Moon Ghoul.
Posted by Padre at 4:01 PM No comments: