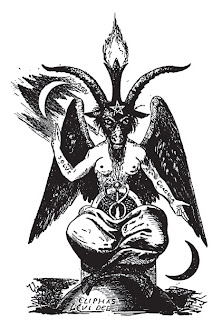 Lookie!   Satan makes it to page two! Ok, even given my profession my first gut reaction is not to do a knee-jerk reaction. My only real complaint is that throwing such artwork right in the beginning creates a certain impression of the game. Too often I think that inclusion of occult imagery in games is like adding nudity to a movie, not essential but often used to juice up the rating. Now does an average fantasy RPG contain demons, more then likely but most games are not centered on dealing with demons, selling souls and such stuff. If they are, that is something that the players and Game Master feel comfortable with as part of gaming.  The two initial pieces of artwork a purchaser of the game sees from the get go is a typical group fighting the dragon and meeting Satan of the Moobs.  Speaking of which, he could really use a chain mail bikini.   Hard to take "The Adversary" seriously with man boobs.


“Life’s too short to spend 60 hours a week crouching in front of a typewriter writing rules. The more you explain, the more you have to keep explaining. Use imagination and initiative, for heaven’s sake!” - Gary Gygax

I have to say this quote makes the game worth reading and potentially playing.

"EP are the most important game mechanic for a TSF player. They represent the untamed forces that propel adventurers ever forward, as well as a player’s strength of character in the face of adversity."

Another great quote and an interesting ability in the game.  Thanks for the nudge Tenkar!
Posted by Padre at 8:40 PM